To mark the 100th anniversary of the “Palacio Canton”, an exhibit is currently on display within its halls which tells the story of this majestic palace, from its beginning a century ago as the family residence of General Francisco Canton to its different uses as a School of Fine Arts, an elementary school, the residence of governors, and now as home to the “Museo Regional de Yucatan” (the Regional Museum of Yucatan).

In keeping with the National Institute of Anthropology and History (Instituto Nacional de Antropologia e Historia or INAH in Spanish), the display consists of 130 period photographs and nearly 70 personal items of the first owner of the premises, displayed on the very property itself.  The “El Palacio del general Canton, 100 años de historia” (“The General Canton Palace – 100 Years of History”) exhibit, which opened last week, recounts the step-by-step construction of this unique building, completed in 1911, representative of an eclectic architectural style, with classical, neoclassical and French baroque details, same which stands out among the other elaborate homes lining Merida’s well-known “Paseo de Montejo”.

Francisco Canton Rosado - Governor of Yucatan between 1898 and 1902 and owner of haciendas and railroads - resided there until his death in 1917. The exhibit features significant objects that were owned by General Canton.

Many luxury structural elements were imported from Europe with the resources General Canton Rosado made from the sale of the Merida-Valladolid railroad, as a franchise holder of same. In fact, there is an exhibit displaying a check for proceeds that Canton Rosado received at that time from the sale of the railroad line for two and half million pesos.

The building became a benchmark for the affluent society of Yucatan during the boom of the henequen-producing industry, and to date is a representative sample of the economic power reached by the so-called divine caste of Yucatan. It is undoubtedly the most iconic historic building on “Paseo de Montejo”, the main thoroughfare in Merida lined by the wealthiest residences of pre-revolutionary Yucatan.

The exhibit, divided into four sections, starts out with a display of around 40 of the 130 photographs that make up the exhibit, representing the construction of the “Palacio” designed by the Italian architect Enrico Deserti.

Anthropologist Blanca Gonzalez Rodriguez of the INAH Center - Yucatan, and curator of the exhibit, commented in this regard on how one can see in the first room entitled " El Palacio Canton” displays from the first stones that were placed in the ground for the construction of the building and a small Mayan thatched-roof house that existed on the site, as well as how the construction project evolved over time between 1904 to 1911 and up through the completion of the mansion, consisting of two floors in addition to a basement and an attic. The second section, "Living at the Palace", represents the everyday life of the Canton family, family parties, the wedding of one of the children, as well as the birth of grandchildren Francisco, Delfina and Araceli.

There is also reference to the period of economic crisis, and how the descendants became indebted and increasingly poor, a situation that drove them to turn over the property to the government in exchange for the latter writing off the taxes owed.

“The Palacio as a Public Venue” is the title of the third section, which recounts the ups and downs of this monument: at first, it was home to the School of Fine Arts (1932-1937), where Fernando Castro Pacheco studied, one of the most renowned painters of Yucatán, who became director of La Esmeralda School of Fine Arts; it was then home to the Hidalgo Elementary School (1937 to 1949) and subsequently, in 1950, it was remodeled for use as a home for governors.


The expert further noted that in 1959 the building became the home of the Yucatan Institute of Anthropology and History (Instituto Yucateco de Antropología e Historia, or IYAH in Spanish), inaugurated by President Adolfo Lopez Mateos and Alfredo Barrera Vazquez, IYAH director. The building housed a library, a research center, the Academy of Mayan Language, and the Archaeological and Historical Museum of Yucatan, which was located in the basement.  In the late 70's, the “Palacio Canton” became the custody of INAH, and the collections were moved from the basement to the main floor.

The last section, “The Life of General Canton”, touches upon the history of its first owner, from his birth in Valladolid, to his arrival in Merida, his wedding, his military adventures from the age of 15, his endorsement of the rule of Maximilian - who granted him the Order of Guadalupe* – up through his participation in the Caste War, which he ends as Governor in 1901.

As part of the celebration commemorating the century mark of the construction of the Palacio Canton, the Regional Museum of Yucatan will offer a series of lectures on the cultural, social and political life of Merida in the early 20th century;  the first which is scheduled for January 19 will include the presentation of the book, "El Palacio del General Canton, cien años de historia" (“The General Canton Palace, 100 Years of History”), that compiles 150 photographs and is edited by INAH as well as the Yucatan Institute of Culture.  The exhibit will run until this coming May at the "Palacio Canton" Regional Museum of Yucatan. 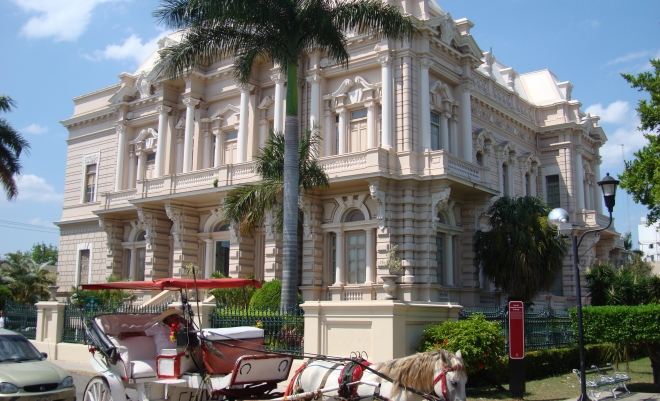