An exhibit of the famous Mexican painter, Frida Kahlo, was unveiled last week at Merida’s “Centro Cultural Olimpo” (the Olimpo Cultural Center). A considerable number of people attended the opening ceremony,  headed by authorities from Merida as well as those from the Art Museum of Tlaxcala. The free exhibit, showcasing a series of original works of art of the Mexican artist Frida Kahlo (1907-1954) who is considered to have had a broad universal vision, is the result of the collaboration between the Museum and the Tlaxcala government.

The showcase stirred the interest of a large number of people; no one wanted to miss out on the exhibition that had been announced coming to Merida over the last couple of years and which, according to Roger Metri Duarte, the director for the Department of  Culture (of the Municipality), puts Merida on the international culture map.

In his speech, Metri Duarte reported that the investment made by the City Council  in order for the Frida exhibit to become  a reality amounted to $750 thousand pesos, less than what was needed for previous exhibitions (like those of Picasso, Dalí and Goya) which exceeded the one million peso mark.

The mayor of Merida stressed, "Having the exhibition of these original works is indicative of  the municipal government's commitment to the strengthening of the cultural life in the capital of Yucatan."

The mayor further pointed out that "the presence of Frida Kahlo serves to position Merida as a leading city, prepared to offer a cultural activity that lives up to expectations."

It also features a board with different signatures in India ink (A black liquid ink used for printing, writing or drawing) on wood dating back to 1948 with a self-portrait of Frida Kahlo, who has been taken to Puerto Rico, Germany, Austria, Belgium, England and Colombia.

Martin Rojas Hernandez, director of the Art Museum of Tlaxcala, was said to have been enchanted with and amazed by the city and gave a brief explanation of the works of art. The ribbon-cutting ceremony then followed, after which everyone went up to the hall to view the paintings, the photos and the essence of Frida.  The exhibit, which is free-of-charge, can be viewed in Showroom Three of the “Centro Cultural Olimpo” and will remain open until this coming April 1.

Need anything? Contact us! We will be happy to assist you 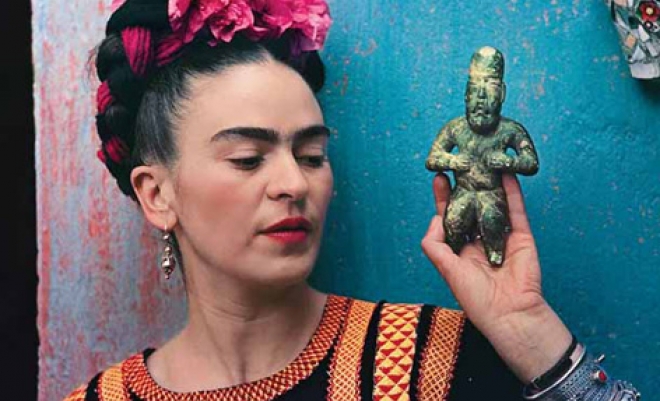