In an effort to increase Yucatan’s tourist amenities, the Yokdzonot Ecotourism Center is now fully operational.  The Center will be operated by the region’s Mayan-speaking community and directly competes with other particular tourist destinations by offering natural features and appeal such as jungle and cenotes, as well as offering hours of adventure.

Yokdzonot, located in the eastern portion of the State and only an hour and a half from Merida, will thus give both national and foreign tourists an opportunity to enjoy an adventure within a Mayan community space that features such attractions as a zip-line (also known as a zip wire, aerial runway, aerial rope-slide, death slide or Tyrolean crossing), a “rappel”**, a bicycle route, camping, hammocks for resting, swimming in cenotes and restaurant service.

The National Commission for the Development of Indigenous Peoples (Comision Nacional para el Desarrollo de los Pueblos Indígenas, abbreviated CDI in Spanish), through the Alternative Tourism Program in Indigenous Areas (Programa Turismo Alternativo en Zonas Indigena, abbreviated PTAZI in Spanish), contributed almost 1.5 million pesos of financing  in order to develop the project that seeks to provide the community with an economic alternative, while at the same time promoting both the careful approach to, and preserving of, nature as well as alternative tourism.

The president of the Yokdzonot Cooperative stressed the aim is for the this to become a landmark for local, national and international tourists when visiting Yucatan, especially nowadays for those who not only seek a different type of trip or outing but for those who also want to be in touch with the community and nature, in order to really get to know and understand the way of life found at these locations.

With the funding from the Yucatan CDI, the Mayan-speaking people of Yokdzonot are able to add yet another ecotourism service or attraction to this destination, namely, the zip-line that invites visitors to enjoy an incredible 60-meter rope-adventure course at an altitude of 50 meters over the majestic cenote located at the site.

The zip-line is one of the main attractions demanded by visitors, thus the decision was made for its installation. Moreover, this tourist spot has the innate requisites for making this rope adventure a thrill while travelling through the air - the person is held only by a harness that hangs from a thick cable.

In turn, the state CDI delegate highlighted the consolidation of the ecotourism center which is part of the 17-project package benefitting from the Alternative Tourism Program in Indigenous Areas (PTAZI).

Over the past five years and through the PTAZI, the National Commission for the development of Indigenous Peoples has invested in various ecotourism initiatives in indigenous Mayan communities.

Among those projects that stand out which were funded over the past year – just to mention a few - are: the San Antonio Mulix Ecotourism Oasis, Uman; Exploring the Underground World of the Mayans of Santa Rita, Chemax; and the Acquisition of the Solar Energy System to Replace the Electric Power and Equipment at the Parador Turístico de Dzilam de Bravo (the look-out point at Dzilam de Bravo).
___

** in mountaineering, the act or method of moving down a steep incline or past an overhang by means of a double rope secured above and placed around the body, usually under the left thigh and over the right shoulder, and let out gradually in the descent 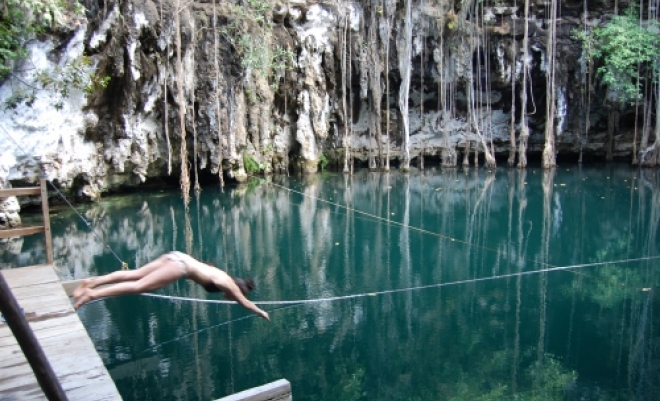