With a view to attracting more visitors from the eastern coast of the United States, Yucatan and the other Mexican states that comprise part of Mundo Maya** were featured in the tourist-industry trade show put on by the New York Times.

At “The New York Times Travel Show 2012”, considered the largest travel-industry event in the tri-state area of New York, Connecticut and New Jersey, Mundo Maya (Mayan World) showcased this coming December 21 as the mark of the end of the ancient Mayan calendar and a transition into a new era, which generated high expectations in the U.S. market.

The Secretary of Yucatan Tourism Development, Juan Jose Martin Pacheco, stressed that “The New York Times Travel Show 2012” integrates an issuing market of visitors of major importance in the eastern coast of the United States.

"The event, held March 2-4 at the Jacob K. Javitz Convention Center in New York City, attracted 24,000 visitors and 7,000 travel agents from more than 150 countries around the world,” he noted.

The presence of Yucatan at the show is part of the Mundo Maya tourism promotion initiative conducted by the Federal Ministry of Tourism (or SECTUR), in coordination with the Tourism Board of Mexico (or CPTM) along with state governments.

Yucatan also spearheaded the tourism promotion initiative for the region of the Mundo Maya, with 111 tourist industry-oriented products at The International Tourism Exchange Berlin (or ITB) known throughout the world as a premier trade fair for the international tourism industry and a driving force for Europe and the 150 countries that define trends for increasing the influx of foreigner visitors to the country.

Governor Ivonne Ortega Pacheco, her Quintana Roo counterpart, Roberto Borge, and Federal Secretary of Tourism, Gloria Guevara Manzo, inaugurated the Mexico Pavilion at the “Messe Berlin” Convention Center site in the German capital where the Programa Mundo Maya (the Mayan World Initiative) was also introduced, an event that will entice the most important tour operators and European leaders of this industry to set their sights on Yucatan.

The ITB, one of the most important trade shows, which was held March 7-10, provided a framework for publicizing the attractions of the Mundo Maya, which now joins the extensive range of countries, destinations and gastronomic routes offered to the leaders of that industry.

The Governor gave the head of SECTUR and the Ambassador of Mexico in Germany the new Yucatán Catalog that highlights and celebrates the notable cultural, ecological and gastronomic attractions and charm of Yucatán, with particular emphasis on Mérida and Chichen Itza.

As part of the tourism promotion initiative which includes the states of Chiapas, Tabasco, Quintana Roo, Campeche and Yucatan, the Mundo Maya Pavilion exhibited replicas of the Chichen Itza and Palenque pyramids, among other emblematic structures.

The purpose for disseminating the Mundo Maya attractions on European soil is to attract Premium Tourism created by such nations as France, England and Germany, even though the scope of the event covers 150 countries.

With this, our state prominently stands out in the worldwide catalog presented to specialists in the field. 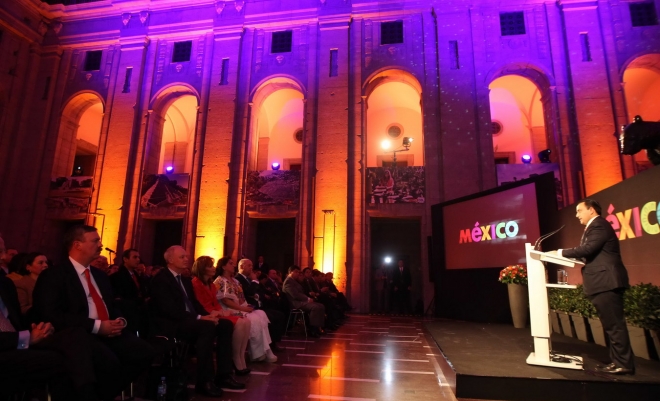