Ready for the Rainy and Tropical Cyclone Season?

The rainy and tropical cyclone season for 2012 began on May 15, 2012 in the Pacific Ocean and will begin on June 1, 2012 in the Atlantic. Please take precautions and watch for warnings issued by authorities in view of these meteorological phenomena.

Federal authorities have predicted 23 tropical cyclones this season: 13 named storms are forecast for the Pacific Basin and 10 for the Atlantic;  of these, four will become hurricanes and, of those, there is the probability of two major hurricanes - category three or higher on the Saffir-Simpson Hurricane scale. The historical average is 11 climatic events a year.

This situation, due to cooling sea surface temperatures in the Atlantic, combined with the potential development of El Niño, favors a reduction in hurricane activity, albeit not in impact inasmuch as if the forecast holds true, the projected phenomena could mean intense natural events with drastic effects.

Among other reasons for predicting a below-average hurricane season are the cooling of the tropical Atlantic during the past winter months, and the relatively-high chance of an El Niño event this summer.  Typically, El Niño is associated with triggering conditions that are known to be less favorable for storm formation.

Distribution, forecasting and the assignment of both dates and names for natural phenomena which could affect the country during the year is in the hands of the World Meteorological Organization.

Jose Luis Acosta Rodriguez, technical director for the national water Commission, explained that a tropical cyclone is a giant whirlpool that covers hundreds of thousands of square kilometers and develops primarily over tropical oceanic areas.

"In order for a tropical system to form it needs sea surface temperatures over 27 degrees Celsius and low-level winds in the upper layers of the atmosphere, a situation that generally arises from tropical-wave and low-pressure formations off the coast of Africa or along the Caribbean Sea," he said.

He pointed out that before the ‘50s, military meteorologists assigned numbers to identify tropical storms and for a short time the Joint Army/Navy Phonetic Alphabet, such as Alpha, Bravo, Charlie, was also used. For many decades, hurricanes in the West Indies were named after the saint of the day (from the Roman Catholic liturgical calendar) for the day on which the hurricane struck. For example, "Hurricane Santa Ana".

"However, in 1953, the use of female names arranged in alphabetical order for naming tropical storms began; alternating male and female names were first used in 1978 - a system which persists to date," he emphasized

He further noted that since then, the nations that make up the World Meteorological Organization determine a list of names reflecting those (names) that are common in English, Spanish and French.

"There are six existing lists for naming tropical storms, each of which consists of 23 names from A to W. These lists are used in rotation, so for example, the 1997 group was used again to name storms in 2003; however, when a hurricane is particularly devastating (deaths and extreme damage), the name it was assigned can be retired from the list," he stated. 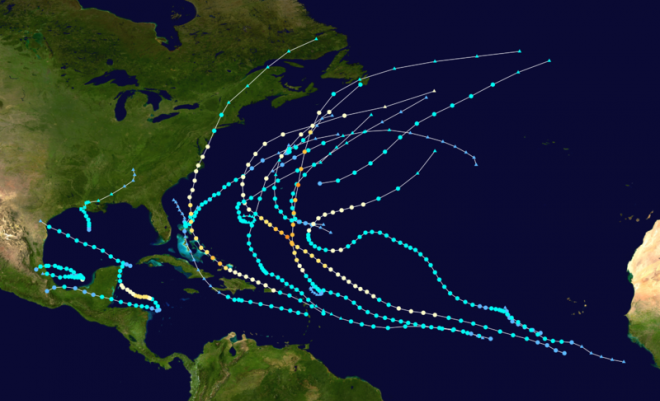