Governor Ivonne Ortega Pacheco was present this past September 24 for the opening of the Gran Museo del Mundo Maya de Merida (Great Maya World Museum of Merida), which included a ceremony featuring the indigenous rituals and regional costumes of these lands.

Among the speakers present at the inaugural event were architect Josefina Rivas; Carlos Hank Gonzalez, director of Grupo Hermes, who headed up the construction of the building; Jorge Esma Bazan, head of Patronato Cultur; and the state governor herself. They all hailed the work as being one of a kind.

Governor Ivonne Ortega Pacheco cut the ribbon to all four permanent-exhibit showrooms on the premises.

"This museum is the clearest expression of my government that our identity, spanning thousands of years, is one of the best bets for confronting the challenges of the future. It was an outstanding debt to our Mayan ancestors, to our culture, to this land and to ourselves," asserted the governor.

"Today we finish a very well-made project that began well, a modern and avant-garde cultural space, where some of the greatest treasures of this land will be stored and displayed. Today the museum opens its doors to display the vast historical and cultural legacy of our ancestors,” said the governor.

Light and Sound
There was also a modern light and sound show, the work of French artist Xavier de Richemont, which will be an added Museum attraction and can be enjoyed nightly, lavishing the facilities with a concert of pre-Hispanic sounds, popular songs, classical, modern and contemporary music.

The Museum
Encountering our roots, claimed museologist Jose Enrique Ortiz Lanz, will give way to this contemporary venue where stories are told and the leading role is played by the spectator.

He listed in detail the 10 main central themes of the thematic structure of the museum:

The creators of the project explained that throughout the exhibits, visitors will find a dynamic and interactive museology, designed to understand, live and feel the archaeology, anthropology, ethnology, history and customs of the land of the Mayab.

The Gran Museo del Mundo Maya is, nationwide, the first to have exhibit reviews in three languages: Maya, Spanish and English, in addition to guides in a specific language and immersion rooms.

Free Admission
As of Tuesday, September 25 and until October 15, admission will be free to the public.  Those interested in visiting can request their tickets free of charge at any window-type ticket counter of the Museum itself or at the one which will be set up at the Yucatan Siglo XXI Convention Center.

The president of the Mexican Hotel Association, Hector Navarrete Medina asserted that this work will be an important link between the tourists and our culture; as such, it will play a decisive role in the dissemination and renewal of promotion strategies and attractions of our state.

In turn, the Grupo Hermes representative, Carlos Hank Gonzalez indicated that the Museum is one of the most significant projects the firm that he heads has backed, having received international recognition. Its creation, he said, is an example of the collaboration of efforts and talent between government and the private sector initiative in favor of culture.

At the end of the formal ceremony, renowned Yucatan singer-songwriter Sergio Esquivel performed "Mayab 2012”, piece composed especially for this occasion.

After the ribbon-cutting ceremony and the light and sound show, Governor Ivonne Ortega Pacheco toured the Gran Museo del Mundo Maya, ambitious project dedicated to art and to pay tribute to the legacy of one of the most emblematic cultures of the world.

Thus, four permanent showrooms remain open to the public and among the largest attractions are the “Chac Mool” and Our Lady of the Immaculate Conception, almost life-size, formally proclaimed in the 19th century.

*original name for Yucatan in the Mayan language 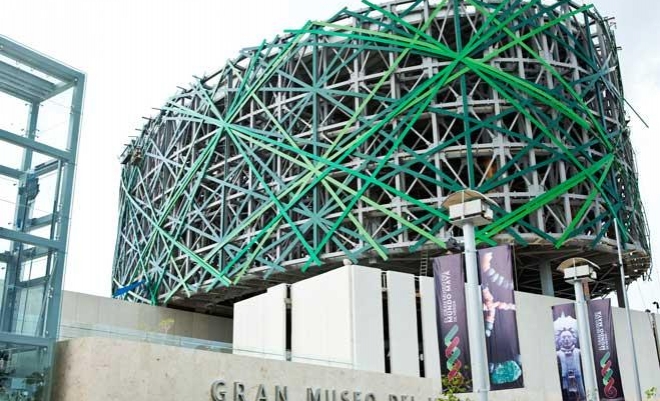