Traces of cacao – or chocolate – have been found for the first time in an archeological context in Yucatán; the chemical residues of the seed (usually called “beans”) were found adhered to two fragments of 2,500-year-old Mayan ceramic pottery, recovered from the Paso del Macho archeological site.  One of the fragments discovered is a plate, which suggests to scientists that the pre-Hispanic Mayans may have used it for their food as a sauce having a consistency similar to that of mole*.

The discovery is of relevance to archaeology, because it indicates that the use of cacao may go as far back as 600-500 B.C., in the region known today as Yucatán.  Though experts have long believed that the beans were solely being used to prepare a beverage, this discovery suggests it was not only used for drinking, but may have also been used as a condiment.

Archaeologist Tomás Gallareta Negrón, of the National Institute of Anthropology and History (Instituto Nacional de Antropología e Historia, or INAH-Conaculta), announced the above-mentioned discovery after having the laboratory results for the study done on the cacao residue found on the pottery shards recovered by him in 2001, along with a hundred ceramic fragments from the Paso del Macho archeological site in the Puuc (mountain) region of Yucatán.

The hundreds of pre-Hispanic pottery fragments were analyzed by scientists from the W.M. Keck Center for Instrumental and Biochemical Comparative Archaeology at Millsaps College in the United States.  George Bey, Professor of Anthropology at Millsaps, directed the study as part of a joint research project between INAH and the U.S. educational institution.

According to the INAH-Yucatán archeologist, this finding is relevant because it indicates that during the earliest of times there existed a complex and stratified social organization in a region that was long believed backward vis-à-vis the rest of the Maya area, while hypotheses pointed to a late developing northern region, as a result of migrations coming from highly civilized settlements from the south and probably from the Olmec area.

The above is reinforced by the fact that the plate fragments were found near the Juego de Pelota (ball court) at the Paso del Macho archeological site, i.e., where authorities resided and ceremonies took place.

"New evidence indicates its consumption also in the Yucatán region, as a product believed to have been reserved for the elite and the priests”, he pointed out.

Tomás Gallareta Negrón also stressed that over the past decade there have been a number of discoveries at sites dating back to the Middle Preclassic period (1200-400 B.C.), like Paso del Macho and Xocnaceh in the Puuc region, as well as  Poxilá and Xtobó, among others located on the western coast of Yucatán, that are forcing a change in the perception of development reached in the northern portion of the Maya region, and that insofar as archaeological research has advanced in Yucatán, it demonstrates that the peninsula has a much more ancient, complex and sophisticated development than had been previously thought at the beginning of this century; and that for at least 500 or 600 years before Christ there were already regional variations in the civilized lifestyle of the Maya region.

* Mole (pronounced MOH-lay) is the generic name for a traditional Mexican sauce. In fact, the word “mole” comes from the Nahuatl mulli, meaning “sauce”.  The most popular type hails from Puebla, Mexico which gives its name to the full description: mole poblano 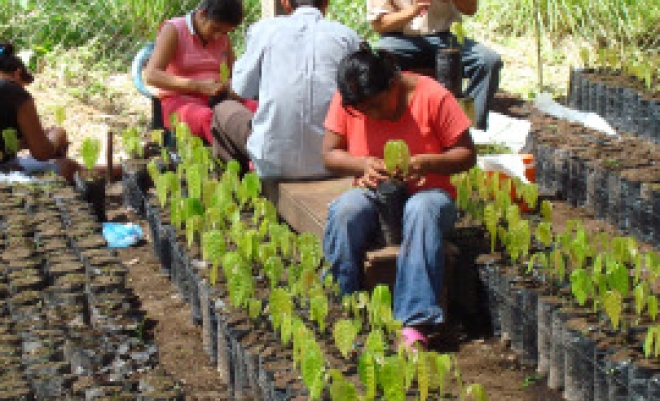