Last week, the United States Government presented Mexico with four biometric kiosks that will be installed on the Mexican border in order to verify with "greater certainty the identity of workers and temporary visitors through fingerprint, iris (eye) and facial analysis.”

"Biometric technology is a very useful tool for improving border security, an important goal for the region, and the delivery of these first four kiosks is an important step in achieving said goal," said Anthony Wayne, U.S. Ambassador in Mexico, according to a statement released from the Embassy.

In turn, Salvador Beltran, commissioner of the Mexican National Institute of Migration (Spanish: Instituto Nacional de Migracion (INM), affirmed,  "We are confident that the cooperation we have established with the United States will lead to increasingly safe and orderly borders.”


The United States Embassy explained that the presentation to Mexico of these four kiosks is part of the Iniciativa Mérida (the Merida Initiative), whereby, since 2008 and in order to combat organized crime, Washington has provided Mexico with help in the form of equipment and training.

Mexico shares a border of approximately 1,150 kilometers with Guatemala and Belize, a border where thousands of Central Americans cross every year seeking to reach the United States.

What is more, the Ministry of the Interior indicated that in 2009 the United States, within the framework of the Iniciativa Merida, began delivery of biometric-capable prototypes at seven points on the southern border of Mexico.

"The design and production of the first biometric kiosks in Mexico culminates with this new equipment delivery," the Interior Ministry said in a communiqué.

He explained in detail that the biometric program has been a complement to the work that the National Institute of Migration has been doing for the last couple of years both with regard to the acquisition of equipment as well as training.

With resources amounting to 58 million dollars, the Iniciativa Merida biometric program will help the Mexico Government departments/agencies build a strong technological network that will strengthen their "ability to identify those individuals that enter the country via the southern border or those who are in an Immigration Detention Center/Facility and represent a risk," said the Ministry. 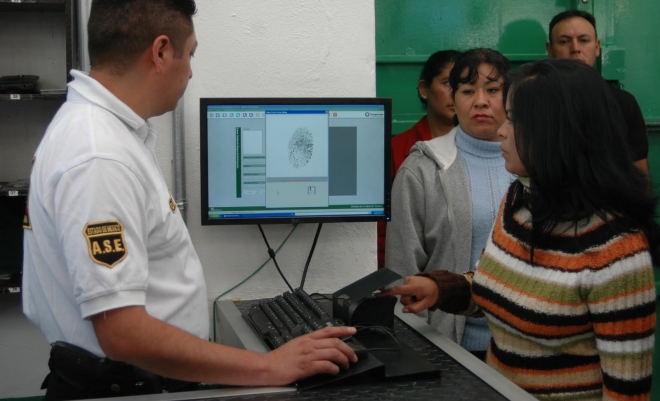