Flights to Havana, Miami and Mexico City from Chichen Itza

Beginning on or about this coming August 20, the Chichen Itza International Airport will have flights to Miami, Havana, and Mexico City, following an agreement signed between state authorities and transcontinental airline Aeromexico as part of the Maya World Tourism Fair 2012.

In the presence of Gov. Ivonne Ortega Pacheco, the above-referenced three flights to Chichen Itza as well as a fourth Villahermosa-Merida-La Habana flight were announced last week, which will further promote the cultural, architectural and archaeological wealth of Maya culture on Cuban and American soil.

Also reported at the press conference held at the Siglo XXI Yucatan Convention Center was Europe’s great interest in travel to Yucatán and the Maya World which has been brought on by the prophecies for December 21, and proof is that Air France already has reservations for up to 60% of its capacity for the months of October and November.

While on his visit to the state, Jerome Salemi, General Director of Air France in Mexico, reported it is for that reason that Air France is adding another flight between Paris and Cancun. This will increase the flow of European tourists to this area of ​​the country, an opportunity to be exploited with tour packages that focus on the Yucatan Peninsula.

The national deputy director of sales for Aeroméxico, Daniel Martinez Gonzalez, announced that together with the authorities of Yucatan and Tabasco, they are working on student discounts of up to 20% on those flights which would only be valid for the regular season.

The aircraft that will arrive at the Chichen Itza airport will have a 132-passenger seating capacity, and as such considered to be widely accepted by the citizens.

"The agreement reached will generate economic revenue for the hotel sector of Piste, Valladolid, Chichen Itza and the entire area of the State," he indicated.

Juan Jose Martin Pacheco highlighted the agreement on the Chichen Itza airport, the same having begun at the Riviera Nayarit-Puerto Vallarta Tianguis Turistico*, which will increase the airline services in order to attract a greater number of visitors to the five Mexican Maya-culture destination.

It was commented at the event that there is already work underway with other airlines as far as the possibility of their arriving at this terminal, but the progress on same will be announced in due course. 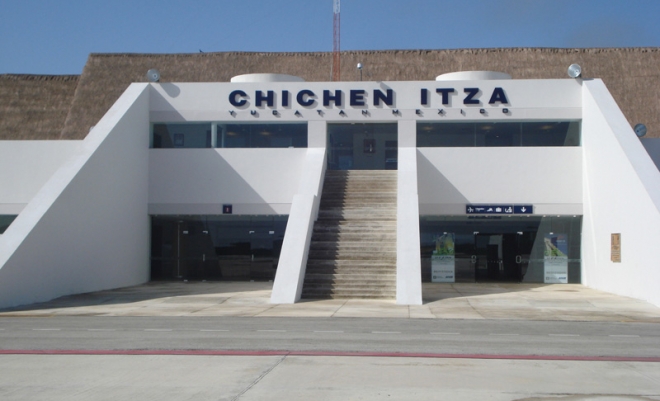